This head waiter, who stands like a dog in front of every guest

There's a Café Savoy in Prague, but it is not where Kafka once got to see performances in Yiddish by the Jewish theatre company from Lemberg in Galicia. These days the original Café Savoy is now a restaurant called Katr where you can grill your own meat, and where the suspended exhaust fans are not completely incongruous with any image you might have had of the dining facilities in a penal colony. 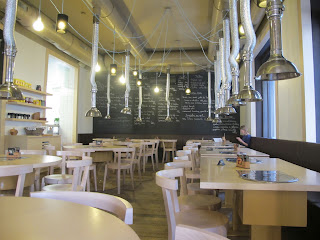 In Katr, when I was leafing through my Vitalis edition of Kafka's drawings, I came across the picture of a 'Grumpy Man in Black Suit' that the editors have placed alongside the following excerpt from his diaries:

Then suddenly we see Löwy, who had seemed to have vanished, being pushed towards a door by head waiter Roubitschek with his hands and possibly also his knees. He was simply to be thrown out. This head waiter, who stands like a dog in front of every guest, including us earlier and later on, with a dog-like nose which sinks over a large mouth closed by humble jowls. [Diary, 14th October 1911] 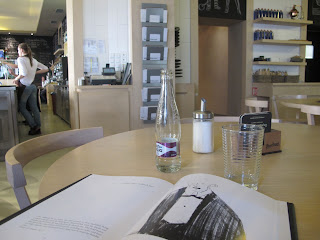 An image, of course, which I left clearly visible on the table for a short while.