I first came across Stephen Mitchelmore's blog This Space on one of those long, anxious evenings, when the only thing that was going to settle me was to read something new about one of my favourite writers. This was also around the time when I had become tired of being the only one I knew who liked the books that I liked. As soon as I tried to explain to my good friends that a particular book didn't interest me at all, no matter that it was 'profoundly moving' or 'fascinating', it would always seem, in contrast to what they had just said, that I was also admitting to my own pathetic diminution as a person, and I started to think that the little corner of my room where I stacked my favourite books (which were mostly written by dead people -- even I could see that) was a kind of morbid, crusted-over lair.

And yet this same corner was where I sat and wrote -- and where I still sit and write -- since it takes time to begin to know, to describe and hence to know a bit better, why it might be that some of us are wary of all these too easily proffered signs of affective or 'solid' meaning in novels. This realisation is hardly a new phenomenon in the world: after all, hadn't Kafka noted the heartlessness behind the overflowing sentimentality of Dickens (although, yes, Kafka is another of those dead writers...)?

It's become clear to me that any very patient, generous and creatively intelligent attempt to write about any of this, in the way that Stephen Mitchelmore has done in his blog and now in his recently published book This Space of Writing, enlivens the world that we live in so much more brilliantly and immediately than many of these apparently 'moving' or 'hard-hitting' or 'fascinating' novels. But how can that be? Perhaps it's the work of the writing that does it: the very process and experience of writing that demands that we stay attentive -- not only to the words themselves (which are so often at the point of escaping us) but, as with so many inexplicable aspects of our existence (our dreams, impressions, fleeting thoughts), also to exactly how the writing has affected us. Our whole being reacts to it. After all, as Mitchelmore tells us in a piece about V. S. Naipaul's The Enigma of Arrival, for the writer, 'whether positive or negative, the encounter demands a response. He becomes a writer in order to respond'. 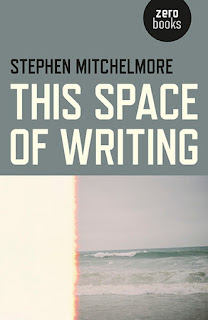 As I write this, now, in this same darkened corner of my room on a day of incredible humidity, I have been remembering that, despite my seemingly dismissive exterior, I was no doubt intimidated for quite a long time by the way that truth and authenticity seemed the exclusive preserve of emotionally replete and satisfyingly fact-stuffed fiction. After all, aren't such qualities the essential building material of so many prize-winning novels, as well as the very criticism that awards those prizes in the first place? If this is literature, I would think, what did I know or feel that might allow me to dare to do anything with it? Precious little. For one thing, I knew almost nothing about most facts and objects in the world around me: I didn't know one eucalyptus from another, and for some plants I only knew the embarrassingly racist common name (this was before I had become so dependent on Google). I also had no patience whatsoever for heart-swelling moments of revelation and 'closure', and particularly not for that celebrated third person writerly tone that, as Mitchelmore notes, is so wittily, and often wistfully, masterful -- so infused with knowingness. Simply put: I was bored and irritated, or rather too dully and too slavishly impressed to do much more than doodle at pieces when I sat at my desk. These were the years when I read about salt and Danish snow and the making of glass and knots and photographic plates -- when I swung from wishing I owned the whole of The World Book Encyclopedia, just so I could bone up on the right bits of fascinating details of unadorned 'reality' to stick in my paragraphs, to being caught up in the anxiety of how I could ever hope to participate in what Mitchelmore calls 'the prissy connoisseurship of fine prose in literary fiction' (since I never seemed to feel the expected way of feeling, and had neither patience nor interest in acquainting myself any further with the particularly fine textures of raffia, silk or maiden hair ferns). The end of writing, it so often seemed, was that we might all 'bury ourselves in dentrology', as Mitchemore puts it so astutely. What were we, otherwise, to do?

It has occurred to me that the mostly unquestioned dominance of these two organising principles in so much 'literary fiction' -- the supposed 'reality hunger' and 'prissy connoisseurship' that Mitchelmore describes for us -- are fundamentally wrong-footed misunderstandings of what Susan Sontag, in her brief but important 1966 essay 'Against Interpretation', calls for when she states that in 'place of a hermeneutics we need an erotics of art'. Art works are art works, she wants to tell us. We can only know them through our senses -- they are above all objects in their own right -- and when we try to get 'behind' them, to decode what they might be 'about', we're missing something fundamentally important about them. But then, as established writing culture might counter: aren't the extensive catalogues of 'unprocessed' reality (the ones that present us with details about shellac glazing, metereological codes, cocaine consumption, ritualised death), as well as the very sensory evocations of beautiful beautiful prose that enact a sensitive appreciation of all the objects in the world about us -- aren't these eminently important foci in works of writing keeping us busy with these objects as objects, the world as the world? Isn't this an erotics of art par excellence?

Peter Brooks had answered her call in his own way, too: he uses a reading of Freud to celebrate, and promote anew, the emotional and sexual pneumatics of teleological plot, of the 'right' ending: Lizzy marries Mr Darcy in the end, not Mr Collins, after all. This, surely, is an erotics of art. Or is it? In her essay, Sontag calls some novels and theatre pieces 'the literary equivalent of program music'. What can she possibly mean? And why is she so keen to draw our attention to form?

Of course, if we really look hard, we should be able to see that, in a novel or a story, we are not actually looking at the shellac, or touching the powdery cocaine: there is writing in between us and these supposedly very tangible objects. Writing is the only object in front of us -- it is the object that has us hankering after Mr Darcy. Without an awareness of the mediating shape or thing of the writing itself -- what she calls 'transparence' -- Sontag seems to be suggesting that no matter that we might feel this close to the astonishing textures of Danish snow or a-bed at Pemberley, we might be no more connected to the shivering strangeness of existence and the work that is made in that existence, than those of us who, last Christmas, succumbed to the exhilarating promise of 'mindful' colouring in. 'The world, our world', she writes, 'is depleted, impoverished enough. Away with all duplicates of it, until we again experience more immediately what we have'.

As I read through the collection of pieces in This Space of Writing, many of which are, but not confined to, reviews of works by Naipaul, Knausgaard, Josipovici, Munro, Bernhard, Kafka, Ford, Beckett, Lin (since they are also extensive meditations -- long trajectories of thought -- that hold all of these works in their widely crossed netting and transparency), I could see that, above all, Mitchelmore is particularly attuned to the form, the feel and the voice of a piece of writing -- the form/feel of its voice -- and that the sum of all these encounters makes his own writing here as tremulously alive and clear as so many of the works he writes about. After all, as Mitchelmore admits, 'sentences affect my experience of the world'. Instead of fumbling around for the feather and bolt contents in the plastic box of a book, whose clear sides we might all take for granted, Mitchelmore takes the whole box in hand and, like Nabokov, relies on the surer sense of his spine to know what it is he is holding.

It is the book itself, then. Literature. Writing. We learn that 'the only way to go is through literature, by becoming apparently more literary, to provoke perhaps even more anxiety...'. And this is why I am so glad that Mitchelmore has made a book out of these selections from his blog. It perhaps makes no sense that the book is valuable in a way that is different from the blog, if many of the pieces are more or less the same, and the book has so many fewer pieces in it anyway, but it is valuable. The book is its own very particular object. I would also add that the blogosphere itself is productive of anxiety -- and even more, I would say, that the notional idea of 'even more anxiety' that Mitchelmore hints at. In fact, for the last long while, I've been so taken up with several large projects that I have become very aware that the blogs I follow are churning their silent scintillations all around me and yet without me, and my knowing this is the case -- and even knowing that blogs are, essentially, a loose and varied form that carry on with their own momentum, whether we check in with them or not -- doesn't make it one whit easier to click into the space of the net to see what has grown here since last I looked. Hence I am so very glad to have this physical copy of This Space of Writing. It sits where it sits in my room and never gets any larger or looser than it already is. A book is contained -- the parts have been selected from the much larger work of the blog -- and I can enjoy all the complex trajectories and connections and echoes in it for the way they won't escape me -- at least not until the effect of reading moves beyond my capacity to track it.

So: there is, simply, the now. The process of it (the reading and the writing). As Mitchelmore concludes at the end of what might be one of the most luminously spare pieces in his collection: 'Reading, breathing, walking, clearing. This might be how writing fulfils itself'.