A photo of a facsimile of a drawing

And, to complete this uncharacteristic run of images: a photo of a facsimile of a drawing done, as the Franz Kafka Museum tells us, while the artist was working at the Assicurazioni Generali (1907-08), with glass, dust specks and damp stains (either facsimile or authentic). 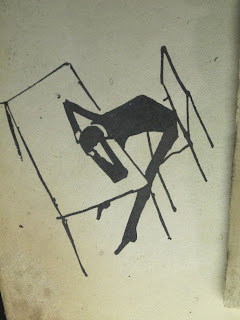 The Franz Kafka Society has a facsimile of Kafka's library, which is open, as I discovered from the sign in the bookshop one Wednesday afternoon, on Tuesdays only. 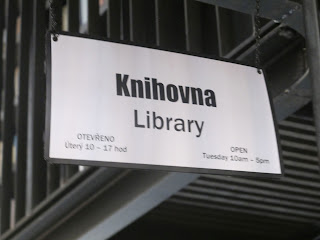 You might then be able to imagine how I felt the next day when I decided to ask whether it were possible after all to have a look at the library, since it was my last afternoon in Prague and the adjoining bookshop still appeared to be open -- there were no barriers at all between the one and the other -- only to be told that, since it was a quarter past five, the facsimile library had only just closed.
Posted by JAAC at 10:48 AM